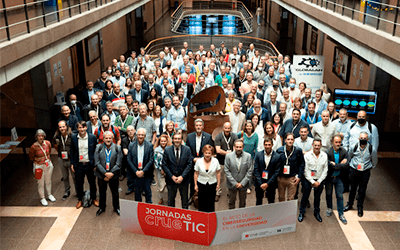 CRUE Spanish Universities is a non-profit association formed by a total of 76 Spanish universities: 50 public and 26 private. It is the main interlocutor of universities with the central government and plays a key role in all regulatory developments affecting higher education in our country.

The Sectorial Commission for Information and Communication Technologies (Crue-TIC) was set up in 2007. Their objectives include advising and proposing to CRUE Spanish Universities as many issues as deemed appropriate in the field of information and communication technologies to improve the quality, effectiveness and efficiency of Spanish universities and to jointly study the needs and applications of these technologies in management, teaching and research, and also proposing joint actions and projects.

The 44th CRUE-TIC Conference was held in May 2022 in La Laguna, addressing the challenge of cybersecurity in universities. In this context, the teams of the partner universities of the CertiDigital project that are part of Crue-TIC were able to meet in person to discuss some key points of the project at the present time.

It should be said that Crue-TIC has long been a space favorable to the development of digital credentials. In June 2018, a group was created by CRUE-TIC for the monitoring and possible applications of Blockchain technology within the SUE, where work was already underway on the issuance of digital credentials through the use of Blockcerts technology developed by MIT and Learning machine.

In October 2018, a Conference on Blockchain technology applied to Education was organized, with the aim of knowing the state of the art of such technology within our country. As a result of these initiatives, it was decided to create a Blockchain network, baptized with the name BLUE (Blockchain Spanish Universities) to start developing and deploying services on it. The first use case that was decided for this new network was the issuance of academic certificates, whose implementation included the modules of degree registration, validator and application for consultation and sharing of degrees (wallet).

BLUE, as a network of nodes of universities belonging or with an analogous relationship to CRUE, based on DLT (Distributed Ledger Technology), also known as Blockchain, was born with the purpose of:

In BLUE, the association and cooperation of other institutions of any nature, public and private, is considered fundamental and desirable for the generation of value and benefits to the network and its purposes.

As we can see, the ecosystem around Crue-TIC is one of the antecedents in Spain of the CertiDigital project and other initiatives aimed at generating digital credentials in Higher Education. In a first phase, CertiDigital will address the centralized technology Educational Digital Credentials for Learning (EDC). In a second phase, the project will be able to successfully implement the distributed technology European Blockchain Service Infrastructure (EBSI), thanks to the experience and knowledge acquired in these years around Crue-TIC.